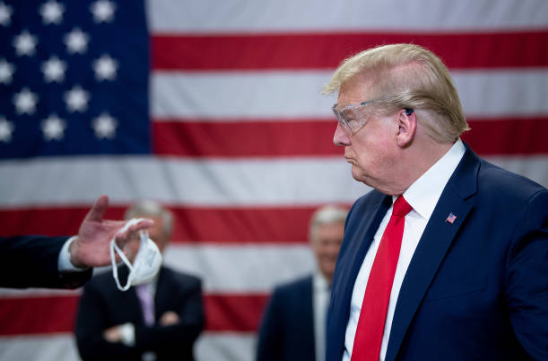 “I just want to say that the end of the pandemic is in sight,” Donald Trump said Thursday night.  A day later he was airlifted to Walter Reed Hospital, down with (reportedly) mild symptoms of COVID-19—so “mild” that he’s now going to stay “several” days instead of “a few” as initially reported.  All that baloney downplaying the virus while trying to turn the public’s attention to antifa violence in the cities, mocking Joe Biden’s intelligence and mask wearing, and proclaiming his Nobel Prize-worthy diplomacy in the Middle East—anything that would enable him to escape responsibility for over 200,000 American deaths—has come to naught.  As Dr. Anthony Fauci said months ago, the virus determines the timetable, and the timetable shows that Trump will be sidelined just weeks away from the election.

Of course being sidelined doesn’t mean Trump will cease making trouble.  His Supreme Court nomination will go forward, his unmasked crowds will remain adoring, his vice president and attorney general will display their usual unfailing loyalty, his chief of staff will pooh-pooh the infection, and the tweets will keep coming as evidence that Trump is still vigorous, alert, and in charge.  Be prepared for Trump to say, “see, it’s just like the flu.”

But (as Biden likes to say) here’s the thing: Trump’s illness is a game changer, and not just because he’ll miss considerable time on the campaign trail (and the golf course).  The illness demonstrates why people, even (and especially!) presidents, ignore science at their peril.  It shows that Biden’s carefulness—wearing a mask, advising social distancing, following the advice of doctors—is sensible and mature.  It also points up the Trump crowd’s recklessness: attending rallies and ceremonies unmasked, allowing Hope Hicks on Air Force One knowing that she was infected, holding a press conference conducted by a press secretary who had also been on that flight, and—perhaps worst of all, according to Chris Wallace—“flouting the ‘honor system’ for the two campaigns to arrive at the debate having already tested negative for the coronavirus.”

COVID-19 has called out Trump and a lengthening list of his supporters. This is not a national security crisis, as some commentators put it; it’s a White House crisis, the result of the arrogance and irresponsibility of the president and his administration.  Such behavior should solidify Biden’s lead in the polls.  Even more so if/when Trump refuses to admit that he’s made a terrible mistake in not listening to his betters. But he has made a terrible mistake, one that would (or should) cost him the presidency.  If he’s smart, he’ll drop the remaining debates, cancel rallies, and—do we dare hope?—resign and move back to one of his hotels.  I bet Melania would vote for that.  For Trump to do that, however, would be a rare departure from character: retreating.