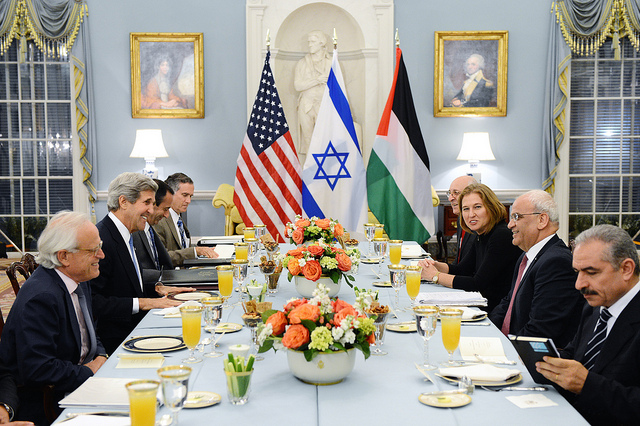 Commentators evidently desperate for good news are touting the Israel-United Arab Emirates (UAE) agreement as a welcome path to Middle East peace. The agreement trades Israel’s promise not to annex portions of the West Bank for the UAE’s recognition of Israel. One conservative writer for the Washington Post actually thinks Trump’s role in helping bring the agreement about makes him a Nobel Prize candidate. But hold on.

Martin Indyk, the former US ambassador to Israel (pictured above, front left), argues in the October issue of Foreign Affairs that the UAE leader’s decision to recognize Israel was made in order to preempt Trump’s “green light” to Benjamin Netanyahu on annexing the West Bank territory. Sheikh Mohammed bin Zayed (MBZ) saw strategic value in opening relations with Israel, but only after being assured of a Palestinian state. The Trump “peace plan” worked against that goal; it contained a “poison pill,” namely, annexation of more Palestinian territory. Thus the deal: normalization for no annexation now. Yes, a strategic win for Trump, Netanyahu, and MBZ, but one that Indyk says will ensure “billions of dollars in arms sales instead of the enormous aid promised to the Palestinians in [Trump’s] peace plan.” Goodbye peace plan and any prospect of Israeli-Palestinian negotiations over a two-state solution.

Palestinians are again being left behind when it comes to US-backed deal making in the Middle East. As a Palestinian journalist wrote, “The problem with the big hoopla around this [Israel-UAE deal] is that it is neither a genuine breakthrough nor will it bring peace between Israelis and Arabs anytime soon.” Most importantly, “this so-called breakthrough fails to provide even a road map for the end of the decades-long Israeli occupation of Palestinian lands” (https://www.washingtonpost.com/opinions/2020/08/13/israel-uae-agreement-is-an-insult-peace-palestinians-arabs-want-need/).

Marwan Muasher at the Carnegie Middle East Center agrees: “The biggest loser from this agreement is not the Palestinians, as many believe, but the two-state solution.” Without that, the Israel-UAE agreement is not a peace agreement but a way to bypass one. “The bottom line remains the same. Any peace agreement that does not have as an aim the termination of the Palestinian-Israeli conflict through the achievement of a two-state solution should not be hailed as a breakthrough” (https://carnegie-mec.org/diwan/82488). Some Israeli commentators agree even while endorsing the agreement. Writing in the Times of Israel, Yossi Klein Halevi says: “Still, there is no avoiding the necessity—for Israel’s sake—of an eventual two-state solution. This deal doesn’t change the fact that forcibly keeping several million people in a state of permanent limbo is a timebomb for Israel. Maintaining our two foundational identities—as a Jewish state, as a democratic state—depends on freeing ourselves from the untenable anomaly of the Jewish people as permanent occupier of another people” (https://blogs.timesofisrael.com/born-of-internal-arab-despair-uae-deal-gives-israel-genuine-chance-of-peace/).

What the deal does provide is a fig leaf to cover for Netanyahu, whose corruption and ineptness in the face of the coronavirus have brought large protests into the streets and a serious threat to his political survival. He had promised to annex the West Bank settlements by July 1; now he can claim a diplomatic success while only temporarily suspending annexation. The Israeli right wing and its settler followers are accusing Netanyahu of betrayal, but he may yet surmount the accusations and win a fourth general election by promising that Israel will eventually absorb the entire West Bank.

Max Boot correctly points out how little Trump has actually accomplished in the Middle East. The full record is hardly a prize winner: Trump’s (and Jared Kushner’s) fawning over Crown Prince Mohammed bin Salman and the murderous Saudi regime; Trump’s abandonment of the nuclear deal with Iran, which has reinstated its nuclear program and turned to China as a strategic partner; his abandonment as well of the Kurds and the besieged anti-Assad civilian population in northern Syria, to the delight of the Russians and Turks; and the peace deal in Afghanistan that in time will mean a Taliban-run country (https://www.washingtonpost.com/opinions/2020/08/15/despite-uae-israel-deal-trump-will-leave-mideast-bigger-mess-than-he-found-it/). All this while giving Benjamin Netanyahu a virtual blank check to rewrite Israel’s relationship with the Palestinians and destroy any possibility of a two-state solution—the Kushner “peace plan” that in fact promoted complete annexation of the West Bank in the first place; the recognition of Jerusalem as Israel’s capital and the movement of the US embassy there; and the withdrawal of aid to the Palestinian Authority.

Will Joe Biden’s administration have the courage and ingenuity to move US policy in the Middle East in a new direction that reflects human-interest priorities? That would mean getting behind a Israeli-Palestinian peace process that promotes mutual security and well-being, including identifying with the nonviolent peacemakers on both sides and taking a hard line on the Israeli right wing’s expansionist ambitions, which both threaten peace and defy international law. The new direction would also end military ties with Saudi Arabia, recommit the United States to the Iran nuclear deal, invest in the search for political solutions in Yemen and Libya, and respond to the humanitarian crisis in Syria. Now that’s a Middle East policy worthy of applause.