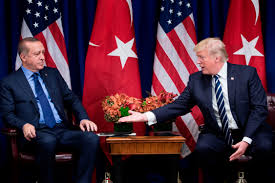 The United States has a long record of befriending the wrong people—authoritarian leaders who rely on military and police power to enforce social inequality and dictatorial rule. Washington’s usual justification is promoting the national interest, meaning either strategic or economic advantage rather than human interest concerns. That transparently false argument eventually catches up with an administration as the ally commits enough outrages to weaken support even among hardliners in Washington. Past US administrations sometimes reacted by promoting regime change or outright abandonment, for example the removals of Ferdinand Marcos in the Philippines, Ngo Dinh Diem and Nguyen Van Thieu in Vietnam, Juan Bosch in the Dominican Republic, and the Somoza family in Nicaragua.

Today, dancing with dictators is again in fashion, but now for personal no less than for political or economic gain. Turkey, Egypt, and Saudi Arabia are among the beneficiaries of Trump’s tolerance, for which he is well rewarded. It’s time to ditch these regimes, along with their DC lobbyists and other supporters. Reportedly, John Bolton, hardly an exemplary diplomat, couldn’t tolerate Trump’s policy-for-profit foreign policy. But his critique only addresses one element of that policy. The other elements are use of “family” members (in the Mafia sense of the word) to conduct sensitive foreign relations, and the rejection of these countries’ authoritarian politics as a factor in policy making.

Turkey’s president, Recep Tayyip Erdogan, should be a prime candidate for abandonment. First off, it’s a family affair: As the New York Times recently reported, Trump and Jared Kushner have developed personal relationships with Recep Tayyip Erdogan’s son-in-law, Turkey’s finance minister, and the son-in-law of a Turkish tycoon who does business with the Trump Organization (www.nytimes.com/2019/11/12/us/politics/trump-erdogan-family-turkey.html). As with Kushner’s personal ties with Saudi strongman Mohammad bin Salman, the pocketbook trumps national interests. The Turks and the Trumps agree that backdoor diplomacy is much more productive than relying on the “deep state.” That way, the Erdogan regime has a free pass to avoid NATO and US sanctions and Trump has a channel for avoiding having to impose them—and conducting profitable business such as the Trump Towers Istanbul.

Erdogan clearly has Trump’s sympathy when it comes to repression of human rights. As the Washington Post editorialized on November 5, following the 2016 coup attempt against Erdogan, “the . . . dragnet was wide: According to Turkish accounts, 189 media outlets were shut and 319 journalists arrested, of whom 180 are still detailed; more than 6,000 academics lost their jobs; 4,463 judges and prosecutors were dismissed; and some 3,000 schools and universities shut down. Since the purge, Mr. Erdogan has further tightened his grip.” This is the same Erdogan who stood up for Jamal Khashoggi after he was murdered by Saudi henchmen of bin Salman. But Erdogan is no hero. That move was obviously motivated by a chance to undermine a rival regime; human rights had nothing to do with it.

Trump and Erdogan share a particular distaste for journalists. “Turkey, which has the worst record of jailing journalists in the world, according to a report early this year from the Committee to Protect Journalists. Turkey, which recently issued a statement banning critical reports on its military adventures in northern Syria. Turkey, which combs through the lives of imprisoned journalists with authoritarian vigor” (Erik Wemple, http://www.washingtonpost.com/opinions/2019/11/13/president-trump-urges-turkish-strongman-call-friendly-reporter/).

When Trump hosted a meeting in the White House November 13 between Erdogan and five senior Republican senators, they avoided those human rights issues altogether. Their main concern was Turkey’s purchase of a Russian S-400 missile defense system. Instead, they heard Erdogan predict $100 billion in bilateral trade (really?), and then listened to him denounce the Kurds as “terrorist organizations.” Reportedly, it was an Erdogan propaganda show (www.cnn.com/2019/11/14/politics/trump-gop-senators-erdogan/index.html). Unfazed, Trump said: “We’ll work out something with Turkey.” Of course they will, “something” that will mean further abandoning the Kurds while ignoring Erdogan’s repressive regime. I wouldn’t be surprised if Erdogan tries to appease congress and the Pentagon by agreeing to a new arms purchase from the US to offset senators’ unhappiness over the S-400 sale and their threat to impose sanctions. But don’t count on Trump to reimpose sanctions no matter what. Just as happened with Saudi Arabia following the Khashoggi affair, Trump will ignore the criticisms in favor of his “friend.” That’s the way crony capitalists deal.

Does the US need Turkey? Clearly not while it is under the thumb of a vicious autocrat. What, after all, has Turkey contributed to the national interests of the US? A bulwark of democratic values? Like Putin, Erdogan believes “Western liberalism” is dying. Like Trump, Erdogan is an unapologetic white nationalist. A major economic partner? Hardly; total trade came to about $20 billion in 2018. A force for NATO or peace prospects in the Middle East? Erdogan is at odds with NATO and with most Middle East governments, including Saudi Arabia as well as Israel. Fact is, Erdogan’s Turkey is serving Russian interests more than he’s serving US or European interests, as his intervention in Syria shows.

It is naïve to believe that the Erdogan regime’s behavior can be moderated or its foreign policy brought into line with European priorities. Withdrawing support from him might galvanize Turkey’s democratic opposition, reverse the current US betrayal of the Kurds, and put the US on the path of disassociating from dictators. To be sure, Russia will take advantage of the US ditching Erdogan, but so what? Let Putin see if he can work with Erdogan over the long haul. He will have to figure out what others never have, namely, that becoming dominant players in another country’s affairs invites nationalist blowback.