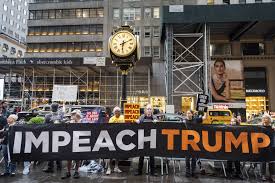 A recent special issue of Foreign Affairs is devoted to profiling some of the world’s most prominent autocrats: Xi Jinping, Vladimir Putin, Recep Tayyip Erdogan, Rodrigo Duterte, Viktor Orban. Strangely, Donald Trump is not included. He should be upset, since he admires every one of them. Trump’s performance in office reveals a man who not only aspires to greatness as an unchallenged leader in the mold of other autocrats, but is clearly dedicated to outdoing them. He is dismantling the Constitution, taking actions that expand the powers of the president at the expense of other branches of government, and abusing his power. (See Post #245, “Overreach, the Achilles Heel of Autocrats.”)
Have you ever heard Donald Trump talk about democracy, here or anywhere? He hasn’t the slightest interest in it. Governing so as to firm up accountability, transparency, and the rule of law is alien to him. What does drive him is finding ways to expand his personal power and make a profit at the same time. And he’s been pretty good at that. Here’s the short list:

• His corruption is in-your-face and boundless, yet critics have failed to rein him in or get the documentation they need to expose corruption’s full extent.
• He has acted the bully whenever things go badly—denigrating judges and courts, demanding absolute loyalty of subordinates (and attacked anyone who turned against him), and insisting that Article 2 of the Constitution gives him “the right to do whatever I want as president” (July 23, 2019).
• He has directly interfered with the work of independent agencies—the department of justice, the FBI, and the Federal Reserve—as though they were his personal instruments that could be used to further his political agenda.
• His attacks on the liberal media are legendary, as is his constant lying: over 13,000 documented lies so far.
• He has essentially dismantled the state department and intelligence community by ignoring their findings, forcing career officers to either resign or be silenced, and carrying out a private foreign policy.
• He has twice sought to get foreign countries to become involved in US elections, with quid pro quos that undermine US national security.
• He has violated international and domestic law, undermined humane practices, and rejected science-based findings, notably in his stances on immigration and climate change.
• He has catered to the “swamp” of energy executives and lobbyists with a destructive environmental agenda that will take years to undo.

Autocrats, however, cannot achieve and maintain their power without help from enablers, and Trump has them: Giuliani, Barr, Pompeo, Pence, Mulvaney and assorted hangers-on with “acting” before their title. They inhabit a world in which lying and dissembling on behalf of their lord and master are essential. They have no principles; maintaining their own power requires enhancing Trump’s. Thus Barr lies about the Mueller report’s findings, Pompeo pretends he was never asked to defend Ambassador Vokanovitch (he lied too), Giuliani disseminates conspiracy theories about Ukraine, Pence lauds Trump’s every move without blinking, and Mulvaney goes around diplomatic and intelligence officials. His cabinet is dominated by self-interested, inept sycophants who know only one thing: Feed the greed.

In a word, this president is a first-class autocrat—an outlier in a constitutional democracy. Yet, to my constant amazement, he may once again lose the popular vote and still win in the electoral college. As is being widely reported, Trump trails Joe Biden, Bernie Sanders, and Elizabeth Warren nationwide by several percentage points, and—thanks to independent voters—that margin is widening. So far the impeachment inquiry is working against Trump. Yet Trump is just a few percentage points behind or in front of the top Democratic candidates in all the battleground states. Are voters in those states really so blind as to reelect the most corrupt, indecent, and incompetent president in American history?
As I write, Andy Beshear has defeated Matt Bevin for the Kentucky governorship, overcoming last minute visits to this very red state by Trump and Pence. And in Virginia, Democrats flipped the senate and house, putting them in complete control of state government. There’s a lesson here for Democrats that was learned in 2018 but must not be overlooked in 2020: health care, the environment, education, and other social wellbeing issues are central to a winning message, and progressive groups are essential to carrying it. Impeaching Trump is necessary but will not be sufficient to claim victory.