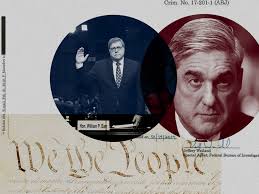 My moniker for this president is Desperate Donald. Now the Mueller report shows the moniker is a good one: It tells us that Trump went bonkers, fearing Mueller’s appointment spelled “the end of my presidency.” In June 2017 Trump told the White House counsel, Don McGahn, to fire Mueller. McGahn refused. Other attempts by Trump to get subordinates to undermine Mueller’s work also failed, the report shows. Publicly, Trump sought to debunk the Russia investigation on an almost daily basis; 1,100 times, to be exact (according to the New York Times, February 19, 2019). All those efforts clarify that the president was running scared, no doubt afraid that his indebtedness to Moscow and Moscow’s expectations of him would be exposed.

Mueller’s investigation was unable to prove corrupt intent on the part of Trump or any of his campaign aides—neither sufficient evidence of a conspiracy with Russia nor obstruction of justice that rose to the level of a crime. But his final report notes several instances, such as the pressure on Comey and Sessions and the order to fire Mueller, that came close to obstruction of justice. “Close to” was evidently not close enough: Trump and his supporters will be claiming “total exoneration” right up to the next election, thanks in no small measure to Attorney General William Barr, successor to Michael Cohen as Trump’s fixer. Too bad nobody followed through on Trump’s demand; then we really would have a clear-cut case for obstruction.

Nevertheless, the Mueller report accomplished four things that could constitute grounds for impeachment or post-presidency indictment. It added to the extensive public record about Trump’s efforts to undermine the investigation, defy the law, lie and misrepresent constantly, and support and engage in extensive secret contacts with Russia. It reinforced all the previous findings of Russian interference in 2016 for Trump’s benefit. It showed that the Trump campaign was willing and able to partake of Russian interference, specifically including the WikiLeaks document dump. Lastly, the report made clear that the president was not above the law and could still be subject to obstruction of justice charges. In fact, one reading of the report is that the Mueller team is encouraging action by Congress to make whole the judgments that Mueller was unable to carry out.

The various ongoing investigations of Trump’s finances will hopefully find the answer to the hanging question not pursued by Mueller: What is Trump hiding about his connections to Russia? Our suspicions have long been that the answer lies in a conspiratorial bribe: Russian money and business opportunity in exchange for an easing of US sanctions and a policy of benign neglect toward Moscow. Will the investigators find the answer in time to make a difference in the 2020 election? Will Robert Mueller become a profile in courage by offering his personal assessment of the evidence his team accumulated? Absent more striking evidence of conspiracy and obstruction, we’re back at square one: He said (“no collusion, no obstruction”) versus We said (“lock him up”). That cannot be allowed to happen. There is a criminal in the White House, and he must be removed.