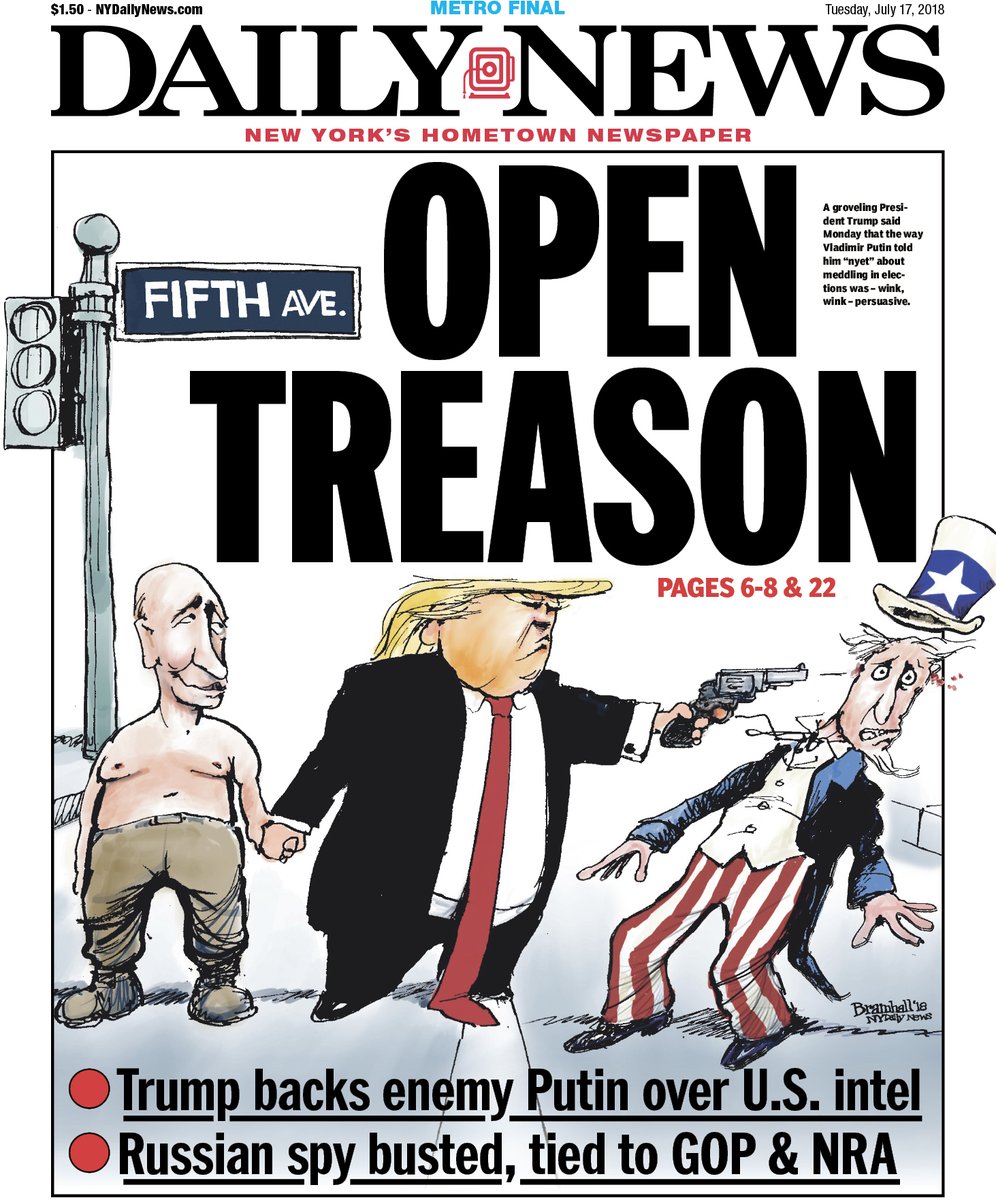 Is Donald Trump not merely gullible, uninformed, and indifferent but actually treasonous when it comes to Russia? More and more high-profile people are saying so. He’s acting like “a Russian mole,” in the words of conservative columnist Max Boot (www.washingtonpost.com/opinions/global-opinions/trump-is-pushing-the-atlantic-alliance-to-the-breaking-point/2018/06/30/c054f0dc-7c8e-11e8-80be-6d32e182a3bc_story.html). “America is under attack and its president absolutely refuses to defend it. Simply put, Trump is a traitor and may well be treasonous,” argues New York Times op-ed writer Charles M. Blow (www.nytimes.com/2018/07/15/opinion/trump-russia-investigation-putin.html). The former CIA director, John Brennan, tweets that “Donald Trump’s press conference performance in Helsinki rises to & exceeds the threshold of ‘high crimes & misdemeanors.’ It was nothing short of treasonous” (https://www.cnn.com/2018/07/16/politics/john-brennan-donald-trump-treasonous-vladimir-putin/index.html). And John McLaughlin, former acting director of the CIA, calls Trump an “agent of influence” for Russia (MSNBC interview, July 16, 2018).

Indeed, one writer reviews the evidence and invites us to consider that Vladimir Putin is Trump’s handler (http://nymag.com/daily/intelligencer/2018/07/trump-putin-russia-collusion.html). And that piece was written before the Helsinki summit. But today, July 19, 2018, we have a mindboggling report from the New York Times (www.nytimes.com/2018/07/18/world/europe/trump-intelligence-russian-election-meddling-.html) that Donald Trump was informed, two weeks before his inauguration, that the US government had rock-solid evidence of Russian interference, directed by Vladimir Putin, to sway the election. CIA director Brennan was one of the briefers on that occasion. So was James Comey.

We now know that Trump has long been aware of a Putin-directed assault on our electoral system. We also know that the Russians have for decades been cultivating ties with Trump in anticipation that he might be an important asset. Finally, we know now more clearly than ever, following Trump’s European trip, that Trump’s notion of national interest coincides all too neatly with Vladimir Putin’s.

Let’s review the evidence. Since taking office, Trump has done the following in service of Russian interests:

• Failing to challenge Russia on annexation of Crimea, intervention in Ukraine, the attack on the 2016 US election, support of Assad’s brutal war against Syrian rebels (including use of chemical weapons), and use of the nerve agent Novichok in Britain. Instead, …
• Blaming his own country for problems with Russia: “Our relationship with Russia has NEVER been worse thanks to many years of U.S. foolishness and stupidity and now, the Rigged Witch Hunt!” Trump tweeted on July 15.
• Making every effort to undermine the Mueller investigation, with attacks on the credibility and even patriotism of his own justice department and FBI.
• Inviting Russian interference during the campaign: “Russia, I hope you can find the 30,000 [Clinton] emails that are missing.” Russian hacking began the same day.
• Failing to take the lead in strengthening the US electoral system against cyber attacks, disregarding repeated warnings from his own top officials about the continuing danger of Russian interference. (Dan Coats, the director of national intelligence, says “we are at a critical point. Today, the digital infrastructure that serves this country is literally under attack.” Trump, standing beside Putin at Helsinki, explicitly says he believes Putin more than he believes Coats: “I have President Putin. He just said it’s not Russia. I will say this: I don’t see any reason why it would be.”)
• Showing no concern about Mueller’s indictments of Russian intelligence officers and some 20 other Russians, nor about the five guilty pleas (so far) of top officials in his campaign and administration.
• Indicating no interest in strengthening sanctions on Russia despite support from within his own administration, and a large majority in Congress, for sanctions.
• Never criticizing Putin’s authoritarian rule and the ongoing crackdown on his journalist, politician, and business critics.
• Going ahead with a summit meeting with Putin that lent legitimacy to Putin’s rule, allowed Putin to easily dismiss election hacking and indictments of Russians, yet offered no concrete indication that any of the other issues dividing the US and Russia—such as strategic weapons, Syria, North Korea, the Iran nuclear deal, military deployments, and trade—had been resolved, ameliorated, or even seriously discussed.
• Undermining European unity and US-European ties, such as by starting a trade war with Europe, which Trump accuses of robbing from the US “piggy bank”; questioning the usefulness of NATO, which he says is “as bad as NAFTA”; questioning the EU, which he says “was set up to take advantage of the United States” and is an economic “foe”; and interfering in European politics, such as by criticizing Theresa May’s Brexit negotiations and Angela Merkel’s liberal immigration policy.

It is almost beyond belief to think that the president of the United States might be doing Russia’s bidding. We’re a democracy, we have constraints on illegal and treacherous conduct, no one can get away with secretly serving another government for very long—right? But remember: We were warned by fifty senior Republican figures in the national security establishment early on in Trump’s presidential campaign that he was unfit to be president and commander-in-chief.* Their concerns were on the money. Yet there was no way anyone could have imagined the depths to which Trump has brought us—the facts and circumstantial evidence that point to impeachable offenses: “high crimes and misdemeanors” and “aid and comfort” to Russia, which the National Security Council has identified in its 2017 strategic paper as the principal threat, along with China.

“America First” seems to mean not just “American Alone” but “Russia first”: Trump is systematically undermining all the pillars of US national security and global responsibility—specifically, support of traditional allies, defense of the republic from foreign interference in our political process, and commitment to human rights, the rule of law, and diplomacy. Just about every policy move Trump has taken in Europe and the Middle East is in Russia’s interest. This conclusion is not to suggest that ameliorating US-Russia tensions is a bad thing; to the contrary, finding common ground with Russia on further reductions of nuclear weapons, nonintervention and power transition in Syria, protecting the global environment, and preventing election hacking would be fine. (See http://www.foreignaffairs.com/articles/russian-federation/2018-07-11/surprising-promise-trump-putin-summit for a well-reasoned argument on engaging Russia.) Problem is, neither Trump nor Putin is seriously interested in tackling any of those issues.

Catering to and appeasing the Russians is not the same as engaging them. It borders on treason. But if you have trouble with that word, let’s just say Trump is a dupe of the Russians. And we—meaning Robert Mueller most of all—must keep pursuing why. I’m convinced he already has the answer—an answer that should be sufficient to remove Donald Trump from office. Meantime, John Brennan’s question hangs over Washington: “Republican Patriots: Where are you???”
—————
*Here is what those officials had to say in an open letter (www.nytimes.com/interactive/2016/08/08/us/politics/national-security-letter-trump.html), which I quoted way back in Post #142: “From a foreign policy perspective, Donald Trump is not qualified to be President and Commander-in-Chief. Indeed, we are convinced that he would be a dangerous President and would put at risk our country’s national security and well-being. Most fundamentally, Mr. Trump lacks the character, values, and experience to be President. He weakens U.S. moral authority as the leader of the free world. He appears to lack basic knowledge about and belief in the U.S. Constitution, U.S. laws, and U.S. institutions, including religious tolerance, freedom of the press, and an independent judiciary. In addition, Mr. Trump has demonstrated repeatedly that he has little understanding of America’s vital national interests, its complex diplomatic challenges, its indispensable alliances, and the democratic values on which U.S. foreign policy must be based. At the same time, he persistently compliments our adversaries and threatens our allies and friends.”