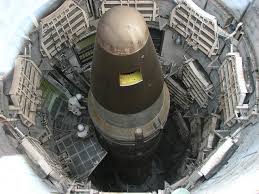 Thirty years ago Americans endured an absurd expansion of the US nuclear-weapon force under President Reagan.  The announced weapons modernization program was accompanied by a huge increase in the military budget, the President’s warning to the Soviet Union that he was willing to spend it into oblivion, and crazy talk from some of his advisers about the potential to fight and win a nuclear war.  So here we are evidently back to the future as the Trump administration forges ahead with nuclear “modernization,” without a set strategy for the weapons but with billions of dollars to burn.

Right now, the US has about 6,800 total nuclear weapons—roughly 1,400 strategic weapons deployed in ground-, air-, and sea-based missiles, and the rest stockpiled or retired (www.armscontrol.org/factsheets/Nuclearweaponswhohaswhat). (The Russians’ arsenal is approximately the same.)  From any rational point of view, these weapons are far more than are necessary to deter an adversary.  Submarine-launched ballistic missiles alone—920 of which are fixed on 230 invulnerable submarines, each missile having destructive power equivalent to many Hiroshimas—are sufficient to destroy an entire country and bring on nuclear winter (https://en.wikipedia.org/wiki/Nuclear_weapons_and_the_United_States#United_States_strategic_nuclear_weapons_arsenal).  There simply is no legitimate basis for believing that the nuclear arsenal needs to be larger, more invulnerable, or more accurate and reliable.

Yet as Americans learned long ago, for the nuclear lobby—the pro-nuclear members of Congress, the military industries that test and produce the weapons and the means of their delivery, and the various Pentagon advisory boards, laboratories, and nuclear planners—enough is never enough.  These folks can always be counted on to argue that the nuclear stockpile must be periodically revitalized to ensure readiness.  And all it takes is a supposed nuclear threat—today meaning North Korea—to bolster the nuclear lobby’s case for upgrading.

The arguments against further investment in nuclear weapons are just as compelling now as they were years ago (www.nytimes.com/2017/08/27/us/politics/trump-nuclear-overhaul.html).  As the US invests more in them, so will the Russians and the Chinese, reviving a nuclear arms race.  Continued reliance on nukes supports pro-nuclear thinking in Pakistan, India, Israel, North Korea, and elsewhere, contributing to the potential for war by accident or design.  These weapons, moreover, which have no purpose other than to deter their use by others, can be inherently destabilizing—as is the case now with a new cruise missile (price tag: $25 billion), whose accuracy and stealth raise the possibility of a disastrous miscalculation by adversaries.  At the same time, such a weapon should, but won’t, eliminate the need for ground-based ICBMs.  No, say the weapons proponents: the ground-air-sea nuclear triad will remain, adding billions to the military budget.

The nuclear weapons lobby is surely delighted with Trump’s decision. The lobby was downcast when it seemed that President Obama was headed toward bringing nuclear weapons numbers down to some minimum figure.  But he reversed course late in his second administration and agreed to new investments in them, apparently in order to ensure Senate approval of the “New Start” agreement with Russia in 2010.  Now, the weapons manufacturers that will be responsible for Trump’s program—Lockheed Martin, Boeing, Raytheon, and Northrop Grumman—are assured of many more years of multibillion dollar activity.

When we think about national security in the human interest, two considerations are uppermost: the quality of life for our people and a peaceful future for the planet.  As to the first, we might evaluate the cost of another nuclear-weapon modernization when matched against the urgent need to start thinking about paying for rebuilding Houston after Hurricane Harvey.  The Washington Post reports (August 28) that “Hurricane Katrina, in 2005, caused $160 billion in damage and Hurricane Sandy in 2012 caused around $70 billion in damage, according to inflation-adjusted figures provided by the federal government.” “Harvey” may well cost more—even more than the full cost of Trump’s nuclear modernization program, which will easily top $125 billion. FEMA (the Federal Emergency Management Agency) reportedly has only $3.8 billion on hand; the rest of the rescue money must come from elsewhere in the federal budget. But, Texans and Louisianans, don’t count on Trump to divert a dime from the military to bail you out.  (Come to think of it, abandoning the Mexico wall project would also be a welcome response to Houston’s calamity.)

The other consideration is global security while nuclear weapons are under the command of Donald Trump.  In the May-June 2017 issue of Foreign Affairs, Philip Gordon offers three crisis scenarios—with China, Iran, and North Korea—that Trump might well mishandle and involve the US in war.  Each potential crisis might lead a president known for recklessness, unpreparedness, and predilection for making threats to consider use of nuclear weapons. So the issue here is squarely about national security for us and for all.