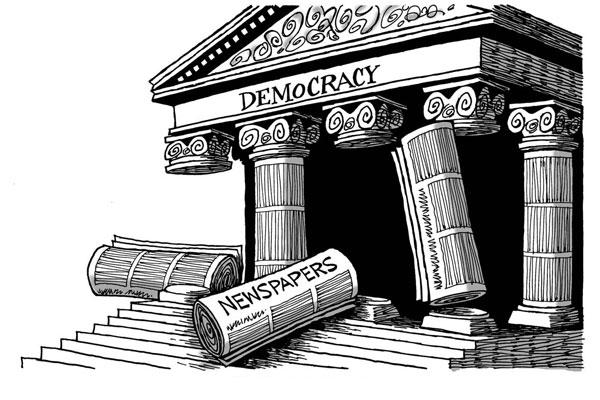 Ambitious national political leaders invariably face a problem: how to get things done in the face of competing interests and institutional rules.  Democratic leaders generally learn how to accommodate those interests, respect the rules, and understand that accountability is the essence of democracy. They work within the system because for all its flaws, the system works. Autocrats regard competing interests and rules of operation with disdain. Impatient to achieve their ends, they bully opponents, limit accountability and transparency, and seek to become the sole source of authority.  Donald Trump seems to be leaning toward the latter approach.

Trump’s problem, as is now obvious, is that he can’t move his agenda as he had hoped.  Being president, he recently said, isn’t so easy. His critics keep reminding him that he hasn’t done much in his first 100 days. He thought he could run the American empire the way he runs the Trump empire—in other words, without backtalk, transparency, or accountability.  What is so worrisome is Trump’s notion of where the problem lies.  For him, it’s democracy under a constitutional system, which he lately is describing as “archaic.”  In an interview with Fox News, Trump expressed disappointment with congressional Republicans, but blamed the constitutional checks and balances for his legislative failures. “It’s a very rough system,” he said. “It’s an archaic system. . . . It’s really a bad thing for the country.”  He assails judges who countermand his orders.  Imagine, said Jeff Sessions: one judge “sitting on an island in the Pacific” can obstruct the chief executive!

The simple fact for Trump is that he can’t automatically get what he wants.  The Democrats, the judges, and the press keep standing in his way.  And they’re able to do that by relying on “archaic” rules and principles, such as the independence of the judiciary, a free and obstreperous press, and the filibuster. As Trump’s agenda continues to fail, we can expect that he will attack all these institutions even more often and vigorously than before.  The theme of the press as “enemy of the people” and publisher of “fake news” will be repeated many times more.  Judges in the Ninth Circuit Court and elsewhere who turn back Trump’s assault on immigration will have to be changed, perhaps along with the organization of the court system.  The mainstream press will have to be sidelined and when possible silenced.  Reince Priebus mentioned the possibility of using libel laws to do so—and even said the administration is “looking at” changing the First Amendment to legitimize suing the media (http://talkingpointsmemo.com/edblog/priebus-trump-considering-amending-or-abolishing-1st-amendment).  The other day, Trump’s reelection committee demanded that its video for showing on CNN display “fake news” when the video came to CNN and other mainstream media.  CNN refused, with support from NBC, CBS, and ABC, and the campaign committee shouted “censorship.”

These are the sorts of things autocrats do.  Trump’s praise (and envy?) of Putin, Xi, el-Sisi, Erdogan, Duterte, and other authoritarian leaders is well known.  He may not like certain of their policies, but he admires strongman rule—the way these men “manage” dissent, push through policies, intimidate legislatures and courts.  Even Kim Jong-un draws admiration—a “smart cookie” whom he would be “honored” to meet, Trump says, because Kim was able to fend off challenges to his power.  It’s a moment ripe for Steve Bannon, who has been out of sight of late but is still lurking around.  Some observers see his continuing influence on specific policies, such as immigration and trade.  But the bigger threat Bannon poses is to the American way of governing by power sharing and competing interests.  Trump’s frustrations are fodder for Bannon, who would like nothing better than to dismantle the state and concentrate enormous power in the White House.

All the above words were written before Trump fired James Comey, the FBI director—a brutal and alarming way to try to scuttle the FBI’s investigation of Russian meddling in the 2016 election.  Trump and Sessions will now be able to appoint a fellow traveler, so to speak, and while that act will not end Senate and House investigations of Russiagate, it will seriously limit what they can hope to accomplish.  Unless the Democrats can find several Republicans who are willing to put full-court pressure on the justice department, there will be no independent prosecutor or special panel.  So much for checks and balances.

Here’s the bottom line: the presidency of Donald J. Trump is repugnant and damaging to the proper functioning of democratic processes.  Although we progressives can mock Trump all we want (for now), he continues to undermine our system of government and brings us closer to the pure demagoguery he so admires.  We citizens must find ways to stop his  grasp for greater power.  We need profiles in courage.