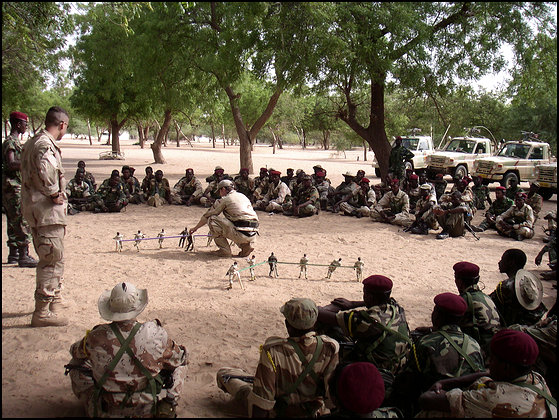 During the Cold War, the US military and the CIA were involved in a multitude of “indirect” interventions in developing countries.  A few—most dramatically and tragically, Vietnam—evolved from a supporting US role to large-scale combat missions.  The Pentagon typically defined these missions as “low-intensity conflicts,” though they hardly seemed as such to the innocent people caught up in them.  Now, just below the radar, the US military is engaged in an ever-increasing number of “advise-and-assist” missions, supplemented by major arms deals and CIA-run drone strikes, that commit the US to long-term intervention in Africa and the Middle East.  And Donald Trump, unlike Barack Obama, is happy to cede operational control—to “let the war fighters fight the war,” as Stephen Bannon told CNN.

The Growing US Footprint in Africa

The US Africa Command oversees a vast array of “outposts”—categorized in Pentagon-speak as “consisting of two forward operating sites [including the one official base in Djibouti], 13 cooperative security locations, and 31 contingency locations.”  Secret documents in 2015 listed thirty-six outposts “scattered across 24 African countries.  These include low-profile locations—from Kenya to South Sudan to a shadowy Libyan airfield—that have never previously been mentioned in published reports.  Today, according to an AFRICOM spokesperson, the number of these sites has actually swelled to 46, including ‘15 enduring locations.’  The newly disclosed numbers . . . shed new light on a constellation of bases integral to expanding U.S. military operations on the African continent and in the Middle East,” Nick Turse writes for Truth-out.org (April 27, 2017).

These outposts support “seventeen hundred members of the Special Forces and other military personnel [who] are undertaking ninety-six missions in twenty-one countries,” according to one writer (www.newyorker.com/news/daily-comment/the-enduring-american-military-mission-in-africa). In Somalia, for instance, Navy SEALs are pursuing an al-Qaeda affiliate, al-Shabab, with the Somali National Army. SEALs are not simply advising and training; they are involved in combat too, as part of a force of 200-300 Special Forces soldiers. About all that is known about the air and ground assaults is that they are increasing (www.nytimes.com/2017/05/05/world/africa/navy-seal-killed-in-raid-against-islamic-militants-in-somalia.html). As the Times reports: “The decision to allow more expansive operations in Somalia is a signal of the Trump administration’s willingness to delegate decision-making power to military commanders and authorize a greater use of force against militant groups.”

The US mission in Africa relies increasingly on training of African troops.  The latest report by the Security Assistance Monitor indicates training in fiscal year (FY) 2015 of nearly 34,000 troops, mainly from Burundi, Cameroon, Tanzania, and Niger (http://securityassistance.org/file/3481/download).  Such security assistance is about $2.5 billion in FY2017 (http://securityassistance.org/africa/data).  It is essentially substituting for other forms of US assistance that would be so much more meaningful, such as rule-of-law training, development aid, and humanitarian relief such as treatment of AIDS.  Ordinarily, the US accounts for about a quarter of humanitarian aid to Africa, but that is now subject to major cuts under Trump.  Aid to Africa is slated to be reduced from about $8 billion to $5.2 billion in FY2018—a plan that senior military officers as well as diplomats consider wrongheaded (www.washingtonpost.com/world/africa/trumps-plan-to-slash-foreign-aid-comes-as-famine-threat-is-surging/2017/03/01/509029ac-fdbd-11e6-9b78-824ccab94435_story.html; www.nytimes.com/2017/06/25/world/africa/white-house-pushes-military-might-over-humanitarian-aid-in-africa.html).

The Africa locations are also essential to US military operations in the Middle East, such as in Yemen, Iraq, and Syria.  In Yemen, for example, US drones support Saudi air strikes, which are being carried out with fewer restrictions than before as the White House allows the military to determine strategy.  High civilian casualties are practically guaranteed to continue.  Were it not for US protection, Saudi Arabian officials would be on trial for war crimes.

Outsourcing in the Middle East

President Trump dramatized the policy of outsourcing to the military by giving General James Mattis, the defense secretary, authority to determine force levels in Afghanistan.  “Several thousand” more US troops may be deployed there, news reports say, as officials acknowledge the war there, fifteen years in, is being lost.  (About 9800 US troops are in Afghanistan, out of a total force of around 13,000.)  Drone operations have increased fourfold over the Obama years.  Nothing the Trump administration has said so far deviates from Obama’s Afghanistan objective, which was to “advise and assist” to the point where government forces could at least keep the Taliban threat at manageable level.  But what is different is the delegation to the Pentagon of authority over troop levels and development of a new strategy. Even as the new strategy has yet to materialize, the US commitment gets deeper—another sign that the Trump team is in over its head and that Trump’s supposed distaste for foreign adventures—on behalf of “people  that hate us,” he once said of Afghanistan—is a fiction (www.nytimes.com/2017/06/18/world/asia/us-troops-afghanistan-trump.html).

US policy on Qatar is another indication of an administration without a consistent message beyond meeting immediate military needs.  While Secretary of State Rex Tillerson seeks to calm relations between Qatar and the other Persian Gulf states that have blockaded and threatened it, Trump remains oblivious to diplomatic solutions.  He’s still back in the Middle East, fawning over the Saudi royals and, incredibly, praising their anti-terrorism efforts while denigrating Qatar as a “funder of terrorism at a very high level.”  (The US ambassador to Qatar, a career Foreign Service officer, resigned June 13, apparently as scheduled but reportedly also in protest of Trump’s meddling.)  But let’s also follow the money here: at the same time Washington is selling the Saudis $110 billion in weapons, it has also announced a $12 billion arms sale to Qatar, thus assuring continued access to the major US air base there.  (For prior US arms sales to the Middle East and Africa, see the table below.)

While the US military gets virtually everything it wants, the UN reports that about 20 million people in Africa and the Middle East are starving. It has requested $4.4 billion to “avert a catastrophe.”  Famine is particularly afflicting South Sudan, Somalia, Yemen, and Nigeria.  One well-informed report from South Sudan indicates ethnic cleansing and possible genocide by the US-supported government forces, causing massive flight from the country amidst widespread hunger (Nick Turse, “Ghost Nation,” Harper’s, July 2017).  The Trump administration has done nothing to address the problem.

What does all this add up to?

First, human rights have low priority in US strategic thinking. Saudi Arabia has emerged, along with Israel, as the key US allies, and have been given a virtual blank check—plus billions of dollars in weapons—to carry out repressive policies.  Friendly relations, Rex Tillerson told a State Department audience in May, requires putting national security first; those relations should not be contingent on American values (http://www.latimes.com/nation/sns-bc-us–tillerson-20170503-story.html). That view helps explain why Tillerson does not want to make US military aid contingent on adherence to human-rights norms.  For instance, he is ignoring internal State Department advice on which countries should have their military aid cut for their use of child soldiers—refusing to remove Iraq from the list or add Afghanistan.

Second, under the rubric of providing security assistance, US intervention in Africa and the Middle East is expanding, contrary to Trump’s professed interest during his campaign in shrinking the US military profile in those regions. “Advise and assist” is an obvious misnomer.  US military forces of various kinds are involved in combat operations, a trend that seems likely to strengthen in the near future.  The danger is the slippery slope, as was demonstrated many times during the Cold War: counterinsurgency assistance will morph into an increasingly direct US combat role, and without Congressional oversight.  (Katrina vanden Heuvel reports that an effort to repeal the 2001 and 2002 authorizations for use of force in the Middle East is before Congress: www.washingtonpost.com/opinions/trumps-chaos-is-covering-for-stealth-escalation-overseas/2017/06/27/30bab1f0-5a9d-11e7-a9f6-7c3296387341_story.html).

Third, the military is driving policy in the Middle East, and the targets seem to be Iran, terrorist groups, and Russia in roughly that order. Protecting access to cheap oil, of course, remains a prime US interest, as the enduring alignment with Saudi Arabia shows.  Beyond that, an actual strategy or vision is hard to detect.* The president evidently has no time for the details of direct US involvement abroad.  Diplomacy seems of little interest to him, which translates to a greatly reduced role for the State Department and the National Security Council—neither of which yet has a lead official on Africa. Witness the assignment of Jared Kushner to deal with Israeli-Palestinian relations—a sad commentary on the low priority of peacemaking.

Fourth, the notion of “America in retreat” is nonsense, especially in the Middle East and Africa.  The US military has a very large and still growing footprint throughout those regions, and no one in the Trump administration is talking about retreat.

If I were the parent of a service man or woman, I would be enraged that my son or daughter is being sent into missions impossible led, on paper only, by a commander-in-chief who is in fact AWOL.  And if I were a citizen of Africa or the Middle East, I would be appalled by the Americans’, and their governments’, preference for guns over humanitarian assistance. Imagine what $24 billion in arms sales since 2010 could have bought in public health and educational training, small business support, environmental protection, and other elements of human security.

* I differ here with Michael Klare, who has recently argued that Trump “is seeking the formation of an alliance of fossil-fuel states led by the U.S., Russia, and Saudi Arabia, while attempting to isolate emerging renewable energy powers like Germany and China.” This so-called “grand design” would not, however, explain Trump’s prodding of the Gulf Cooperation Council to blockade Qatar (an oil producer), US confrontation with Russia in Syria, the military’s ascendancy on the battlefield, efforts to curry favor with China (also an oil exporter), or hostility toward Iran, another major oil exporter. See www.ecowatch.com/trump-new-world-order-2440332361.html.