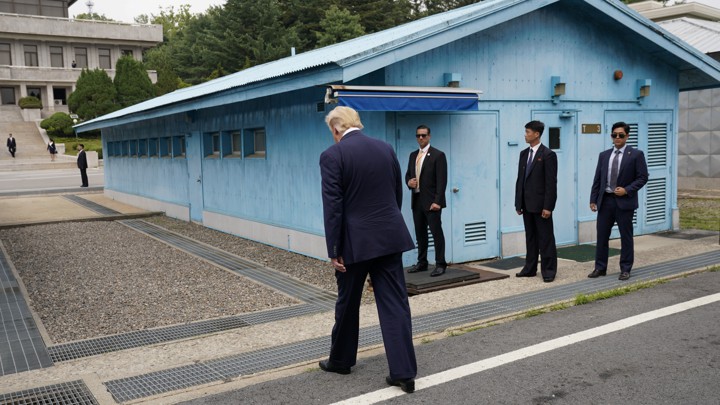 Taking a few steps onto North Korean soil, and posing for pictures with a friendly dictator, seem to fit Trump-era diplomacy better than a carefully laid out process. But unless the US changes its bargaining position—in fact, starts to bargain—nothing will be come of this sudden trip, and Trump will have given North Korea another PR victory: the US president accepting it as a nuclear state.

The media’s focus on Trump making history is strange, and a distraction from the main issue: peace and security on the Korean peninsula. Whereas Trump took a few steps inside North Korea, Jimmy Carter (in 1994) and Bill Clinton (in 2009) made peace missions to Pyongyang that had substantive results. The only real history Trump is making is his consistent adoration of dictators and substitution of nice personal exchanges for problem solving.

More noteworthy than Trump’s gambit is the NY Times report that Trump is considering a different tack with the North Koreans this time around, namely, a proposal for a freeze on the North’s nuclear weapon production (presumably meaning production of the materials for the weapon as well as the weapon itself).  Critics are already jumping on that idea too, pointing out the obvious: North Korea would retain its nuclear weapon stockpile while continuing missile testing. The US is said to weigh proposing that in return, North Korea will agree to abandon perhaps two weapon production and testing sites under international inspection.

Granted, such a US proposal would mean acknowledging what no administration had been willing to acknowledge before: that North Korea is a legitimate nuclear-weapon state.  Pro-nuclear forces in South Korea, Japan, and perhaps elsewhere (Saudi Arabia? Iran?) might be emboldened to insist on having the same privilege, raising all kinds of regional security and proliferation issues.  And how likely is it that Kim Jong-un will agree to intrusive inspections of his nuclear facilities?

On the other hand, let’s face it: the demand of the last three administrations for “complete, verifiable, irreversible denuclearization” of North Korea is simply unattainable.  So a nuclear freeze may be the best deal possible. (Among the few specialists who agree is Joel Wit, who has been involved in nuclear negotiations with North Korea: see his op-ed at www.nytimes.com/2019/07/01/opinion/north-korea.html).  What follows that deal counts just as much.  If it paves the way for further steps—for example, a permanent halt to North Korean missile tests in return for a partial easing of US sanctions, a peace treaty (including South Korea, China, and Japan) to replace the Korean armistice, and farther down the road a significant North Korean reduction in nuclear warheads in exchange for elimination of US sanctions and normalization of relations—the freeze would be a win for both countries.  Otherwise, Trump has gained very little—a freeze can quickly unfreeze, and nuclear production can be resumed or started elsewhere—in return for major North Korean gains in international recognition and continued possession of a substantial nuclear-missile arsenal.