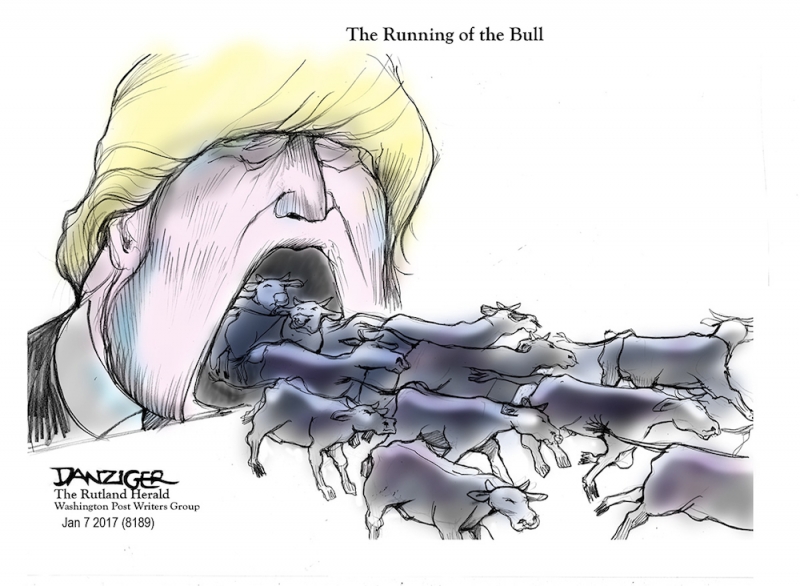 Three of Donald Trump’s latest ploys to distract attention from Russiagate have failed.

First was Rep. Devin Nunes’ late night visit to the White House under escort by two staff members to view classified information. The visit increasingly looks like a prearranged attempt to divert his committee’s investigation into Russiagate.  One of the escorts had been appointed by Michael Flynn, the former national security assistant; efforts by Flynn’s successor, H.R. McMaster, to remove him were reportedly thwarted by Trump himself.  As Sean Spicer might say, this episode doesn’t pass the smell test: It sounds like a “weapon of mass distraction,” as someone on CNN said.  Trump is grasping for straws—anything that will lead the media and investigators away from the Russia matter, all the more so now that Jared Kushner’s meeting with the representative of a sanctioned Russian bank has become known.

The second ploy is a signature example of Trump’s untrustworthiness: His turnabout on immunity for government officials who might be prosecuted for criminal behavior. As he has shown time and again, what he once said about a matter is irrelevant to what he now says. Recall that in late September 2016, Trump said in reference to Hillary Clinton and senior staff seeking immunity over her use of a private email server: “The reason they get immunity is because they did something wrong. If they didn’t do anything wrong, they don’t think in terms of immunity. Five people. Folks, I’m telling you: Nobody’s seen anything like this in our country’s history.”  Flynn followed up the same month on NBC’s “Meet the Press”: “When you are given immunity, that means that you have probably committed a crime.” A number of other Trump senior staff weighed in at that time, trying to score points off the idea that a President Hillary Clinton would be under FBI investigation for years, presenting an intolerable situation.

Now that Trump is under assault, he wants Flynn to testify under immunity, to challenge the Democrats’ “witch hunt.”  Same old diversion strategy, and it too smells bad. Trump must be supremely confident that Flynn has nothing to offer the intelligence committees. Recall that Trump waited two weeks before firing Flynn, a clear sign of his hope that Flynn could weather the storm. Flynn, meantime, has lots to gain from a grant of immunity, notably, his discussion of sanctions with Russia’s ambassador while still a private citizen.  Like Nunes, Flynn is a proven Trump loyalist—a former campaign booster who will do whatever is demanded of him to frustrate a probe of collusion with the Russians. Wisely, the Senate Intelligence Committee turned Flynn down, at least for now.

Trump’s third ploy is to keep massaging the “wiretap” accusation, each time trying to redirect the media and Congressional investigators to “find the leakers.”  Trump began by directly accusing President Obama of having wiretapped him at Trump Tower.  That accusation got nowhere, so he diverted to the accusation that he and his team had been “surveilled” by Obama’s people.  Now that that charge has been shown to be nothing more than ordinary and perfectly legal National Security Agency eavesdropping on phone calls initiated from abroad, Trump is asking for investigation of any kind of surveillance by anyone at any time.  It’s a fishing expedition that he (probably in league with Stephen Bannon) surely knows can go nowhere.

From the president on down, this is an administration on the defensive, populated by people who are their own worst enemies.  The Watergate model looks more relevant by the day.